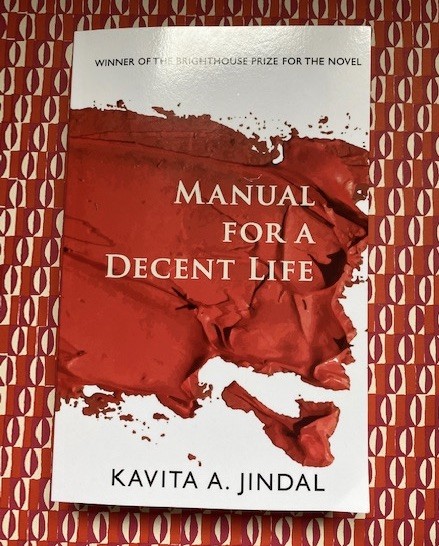 Manual for a Decent Life

Manual for a Decent Life by Kavita A. Jindal is a work of political fiction based in North India in the late nineties. This period, following the restructuring of the economy in the early 1990s, saw massive changes in the social, economic, cultural and, unsurprisingly, political fabric of the country, and was marked by the mainstreaming of the fringe Hindu right. This novel reflects a microcosm of that reality, a micro perspective on the personal impacts of these changes on North Indian elites, of different religions and professions, but elites nevertheless. The novel carefully brings to attention how the personal and political interact for those with social, economic or political capital and with the agency of the privileged – that is, the option of choosing how much the political impacts the personal, often absent for the non-privileged.

The protagonist of the story is a young Muslim woman and mother, Waheeda, from a fictional town in Uttar Pradesh called Nulkazim. Belonging to a family with political lineage, she is portrayed as a head-strong, resilient woman who has to continually undergo many losses – right to the end of the story. Despite this, she carefully maintains a ‘normal’ façade, accurately reflecting the ideal Indian woman who must continue performing her role regardless of her personal pain, until she can’t dissemble anymore and has a breakdown. Waheeda is throughout surrounded by and her story interlinked with different men – her father, brother-in-law, husband (from whom she has been unofficially separated), her lover, and her driver. The novel begins with her wanting to fulfil her father’s ambitions for her and then moves on to her meeting the expectations of her husband. As the story of her journey into politics begins, her path crosses with the semi-rich son of a very rich Hindu businessman in Delhi and both are completely smitten with each other. What follows for the next couple of chapters is the blossoming of their necessarily secret love against a backdrop of an emerging Muslim politician, elections, booth-rigging, issues of development in rural areas, musical concerts, gossip circles and parties for the wealthy in Delhi until the eventual breakdown of the secret affair due to misunderstandings and also to the added burden of secrecy. Waheeda’s story, after the breakdown, true to her character and pushed by her husband, ends with her re-joining politics and winning the elections, a testament to her strength and resilience.

Jindal has done a good job of developing each of the characters as the story flows, introducing details about their life, work, passion, friends, childhood and the story is richer for these details. The story picks up pace as it proceeds though there is space for more context about the country’s political background, which currently might not offer a lot of detail for those not familiar with Indian politics. More worryingly, the story also plays into common narratives that exist in the mainstream such as those of the extremist Muslim in contrast to the good, development-focused Muslim;  the idea of the ‘violent’ countryside in contrast to the traditional yet progressive city; and the female protagonist having the ‘feminine card’ misused against her for political gain consequently resulting in women adhering to existing patriarchal structures in exchange for representation. In a heterogenous country such as India, the reiteration of these narratives may stem from the realities of widely varying lived experiences of the author and the protagonist, both occupying distinct social, cultural, political spaces that come with their own set of constructs and understandings of each other.

The novel offers an interesting perspective on the many overlaps between the personal and the political for the elites of Northern India. Further, it also brings to light how in a country like India the elites can choose the extent and degree of their interactions with politics and politicians at their convenience. The book ends with political victory for the protagonist at a personal loss to drive home the point of the strong, independent woman who is willing to sacrifice her personal desires for her father’s ambitions.