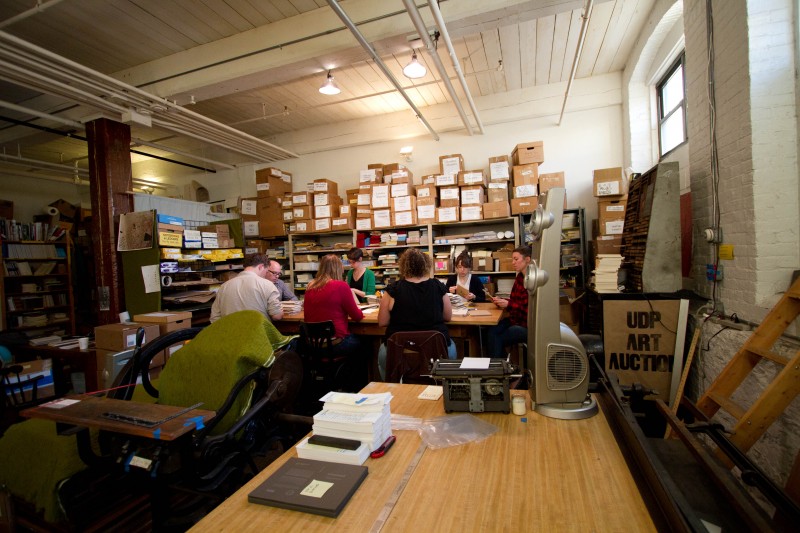 The ‘Professionalization’ of the Small Press?

In this post Matvei Yankelevich, one of the founding editors of Brooklyn’s Ugly Duckling Presse, considers the way that the current institutions of ‘support’ for small presses in the US have the effect of pressurising small presses into giving up the modes of resistance and challenge that have been historically crucial to their existence.

More than ever, the need for the small press to retain ‘authenticity’ – historically tied to the anti-commercial, anti-institutional, and amateur ethos of small press publishing – against injunctions to professionalize from funders and institutions place the small press in a double bind. Professionalization comes with a price, and my intention here is to set out examples of the real effects of the burden placed on small presses by the institutions that ostensibly support their work, while public arts funding diminishes and the ‘negative’ or ‘poetic economy’ of small press plunges its mostly volunteer labourers further into debt.

In the US, the central organisation ostensibly working to support and develop small presses is the Community of Literary Magazines and Presses. A reduction in funding from the National Endowment for the Arts and a concomitant increase in demands around quantitative reporting have meant changes to the way CLMP works. Since 2000, CLMP's programmes have shifted emphasis from supporting small presses through micro-grants and advocacy to acquiring larger readerships in ways that compromise small press aims and modes of working. CLMP began to organize mentorships and workshops, for example, led by representatives from the literary imprints of ‘bigger houses’ who ‘teach’ the smaller publishers publicity tactics, strategies for promotion, methods of mobilizing their authors' ‘platforms’ and connections in the media, and so forth. While these initiatives appear to offer support to small presses, the reality is often more complex and more problematic. Those invited to teach these workshops have resources (marketing teams, underlings, corporate structures, or wealthy boards and patrons, not to mention full-time salaries) that are unattainable – and sometimes fundamentally undesirable – to most representatives of small press in attendance.

Around the same time, in the early 2000s, CLMP began a partnership with Associated Writing Programs (AWP) – the largest national professional organization for teachers of Creative Writing in the US – to host mini-conferences for their members at their annual conventions. Ostensibly, this would allow member organizations outside of New York City access to some of the programming that CLMP hosted in their office – provided, of course, that they attended the costly convention. The aim of this partnership was also to bring the marginal publishers closer to the limelight of a professionalized world of MFA programmes and the celebrated authors and successful publishers attending AWP. However, the demands and assumptions of such programmes, as with the CLMP workshops, too often cut against the culture of small press publishing. As an example, AWP have included more than twenty panels on chapbooks in their annual conferences between 2007 and 2019. Not surprisingly, several of these chapbook panels were pitched toward the Creative Writing instructor, with titles such as ‘Hands-On: Chapbook-Making in the Writing Classroom’ (2009) and ‘Get a Hold of Your Writing: Book Arts in the Classroom’ (2013) which advertised ‘the possibilities that book arts can bring into the creative writing classroom’ and pedalled the pedagogical use-value of a form previously sustained by poet-publishers and poetry communities outside the academy. By 2015, the chapbook had, according to one AWP panel, ‘risen’ above its modest beginnings: ‘Once cheaply produced ephemera, the chapbook today is a product of quality printing methods and editorial care.’ The assessment that little ‘editorial care’ had been given the chapbook previous to its institutionalization illustrates AWP's backhanded mode of ‘including’ small press activity in its programming.

Similarly, AWP's recently instituted Small Press Publisher Award to recognize ‘nonprofit presses and literary journals’ and ‘the important role such organizations play in publishing creative works and introducing new authors to the reading public’ excludes most small presses through its rules and requirements. The nominated publisher has to have attended and exhibited at the three most recent consecutive AWP conferences to be considered, and must be an official non-profit organization in operation for five years or more at the time of its nomination. The title of the award is misleading if only because many small presses do not have their own non-profit status with the IRS. Furthermore, the AWP only recognize presses who can afford to consistently attend and exhibit at the AWP book fair, and find it valuable to do so. At a cost of $1950 for three years of attendance ($650/year), not including travel expenses, the award of $2000 would scarcely cover the expenditures necessary for eligibility. Yet because the general public attending AWP as well as its funders are unaware of (and deliberately blinded to) the facts of small publishers' indentured servitude to the organization and the criteria that make this award inaccessible to many editor-run presses, AWP can expect to earn kudos and cultural capital for their ‘support’ and ‘recognition’ of small press.

What these examples show is that market-oriented programming in service-to-the-field organizations is of a piece with the consolidation of higher individual giving, corporate investment, and government grants to non-profit publishers with the largest audiences and most secure promise of financial growth, and with the importance given by arts-grantors to quantifiable data pertaining to public services. In order to ‘grow up’ and ‘come in from the cold’, small presses must comply with quantificational measures that determine and enforce ‘quality’ or ‘excellence’ – such as non-profit status – and with the market-driven demands of those ostensibly supporting them. So that it may pursue institutional support, the small press – with what Steve Evans has called ‘its anti-capitalism and its insistence on autonomous intellectual/poetic production and evaluation’ written on its tattered sleeve with ‘low-end’ design, second-hand equipment, low circulation, and volunteer workforce – is now being asked to buy some new shirts and market its own authenticity.